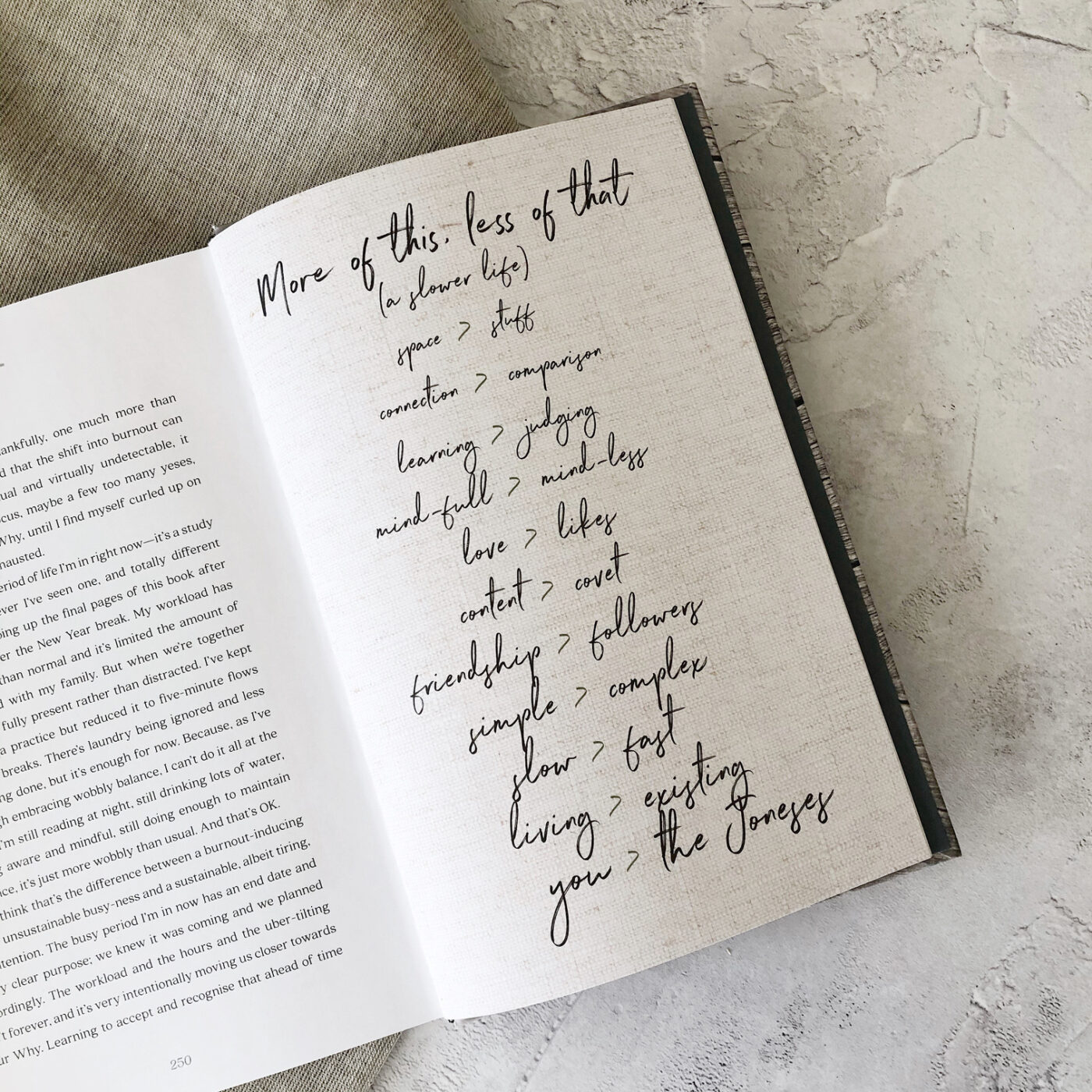 These carefully curated simple and slow living quotes inspire us to live better not faster in the modern era. They include those from key thinkers on the slow movement, such as Carl Honoré and the man attributed to the birth of the slow food movement, Carlo Petrini. You’ll also find quotes from SLOW by Brooke McAlary and thoughts around the meaning of minimalism from Leo Babauta, founder of blog Zen Habits.

We’re frequently updating and curating this article as we come across new quotes in slow living books, interviews, and even song lyrics. These also include quotes about slowing down which are inspired by other tenets of the slow movement, such as slow interiors. What each quote has in common is a belief that slowing down offers many of the answers around how to live a more meaningful lifestyle.

“The great benefit of slowing down is reclaiming the time and tranquility to make meaningful connections–with people, with culture, with work, with nature, with our own bodies and minds”

Go with the slow

Unknown, but appeared in Flow Magazine

“Slow living is all about creating time and space and energy for the things that matter most to us in life, so ask yourself what you stand to gain.”

“There is more to life than increasing its speed.”

“Slow living isn’t about determining how little we can live with – it’s about working out what we simply can’t live without.”

“Nature does not hurry, yet everything is accomplished.”

“…to be slow means that you govern the rhythms of your life. You are in control of deciding how fast you have to go.”

“Slow living is less of a style and more a deeply personal mentality.”

“Be a curator of your life. Slowly cut things out until you’re left only with what you love, with what’s necessary, with what makes you happy.”

Lin Yutang, The Importance of Living

“Slowing down is sometimes the best way to speed up.”

“Slow down, you’re doing fine, you can’t be everything you wanna be before your time.”

Billy Joel, lyrics from ‘Vienna’ (The song saw a surge in popularity due to Instagram reels.)

“Slow living provides an opportunity to step back, pay attention, and question the ways we use technology, to recalibrate our relationship with the constantly switched-on, logged-in world.”

“In order to seek one’s own direction, one must simplify the mechanics of ordinary, everyday life.”

“In the 1980s, simplicity was seen primarily as “downshifting” or pulling back from the rat race of consumer society. Several decades later, there is a growing recognition of simplicity as “upshifting”—or moving beyond the rat race to the human race.”

“Hygge is humble and slow. It is choosing rustic over new, simple over posh and ambience over excitement. In many ways, hygge might be the Danish cousin to slow and simple living.”

“The central tenet of the Slow philosophy is taking the time to do things properly, and thereby enjoy them more.”

“We’re a species that rushes through everything, then complains that time flies.”

“Slow living is a curious mix of being prepared and being prepared to let go. Caring more and caring less. Saying yes and saying no. Being present and walking away. Doing the important things and forgetting those that aren’t.”

Head to our Instagram page for more inspiration on how to live better, not faster.

“Slow down in your pursuit of happiness and it’s more likely to catch up with you.”

“Simplicity boils down to two steps: Identify the essential. Eliminate the rest.”

“When we rush, we skim the surface, and fail to make real connections with the world or other people.”

“The idea of the modern has been superseded; the challenge today is to return to the small scale, the hand made, to local distribution – because today what we call ‘modern’ is out of date.”

Carlo Petrini, quoted in The Independent

“Doing a huge number of things doesn’t mean you’re getting anything meaningful done.”

Leo Babauta, The Power Of Less: The Fine Art of Limiting Yourself to the Essential

“Urban life itself acts as a giant particle accelerator. When people move to the city, they start to do everything faster.”

Carl Honoré, In Praise Of Slowness: Challenging the Cult of Speed

“Simplicity is not about deprivation. Simplicity is about a greater appreciation for things that really matter.”

“Living ‘Slow’ just means doing everything at the right speed – quickly, slowly, or at whatever pace delivers the best results.”

“There is only today, with holes in our pockets, with time spilling out. We cannot keep it for tomorrow.”

“We need to build a pause into our decision making and be more considered – from goods, media, marketing and messages, to unwanted advice and opinions, which sometimes are our own.”

“The slow philosophy is not about doing everything in tortoise mode. It’s less about the speed and more about investing the right amount of time and attention in the problem so you solve it.“

“We may feel productive when we’re constantly switching between things, constantly doing something, but in all honesty, we’re not. We’re just distracted.”

As these quotes remind us, slow living isn’t about living at a snail’s pace, it’s about assigning the right amount of time to the things that matter to us.

For more inspiration around slowing down, read our complete guide on how to slow down which discusses how to put your values at the heart of your lifestyle, ideas for moments of everyday deceleration and living consciously.

If you’re new to the slow movement, don’t miss our recommended slow living books to get started. Many of the quotes featured here are from the authors of these books.